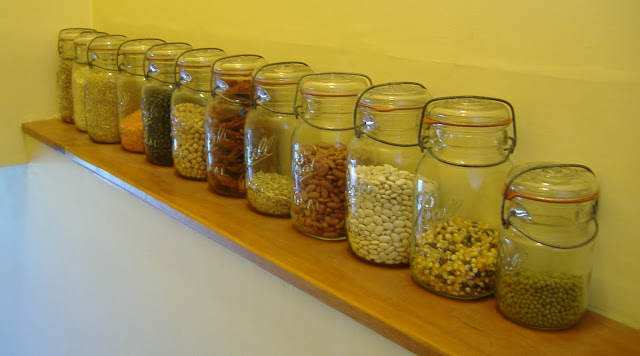 The fruits of our labors

It's been nearly six months since we first embarked on our edible landscaping adventure. Our plum trees are now taller than we are, and covered in nice green (if slightly insect-damaged) leaves, but we still have a few years to go before we can expect to get any fruit off them. Our bush cherries, though still small, actually produced a few cherries this summer, but not very many, and the birds got most of them (we'll have to use some bird netting next year). However, our raspberries are a completely different story. As I mentioned when we bought them, raspberry bushes produce new canes each year, and these new canes produce fruit in the fall. And, if the bushes don't have any of last year's canes left on them, they put all of their energy into producing new ones, and you end up with a pretty heavy crop in the fall. So what this means is, the tiny little sticks that we planted at the end of March are now big, sprawling, thorny tendrils that have already reached their full production. 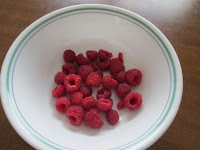 The first few berries started showing up in late July or early August—just one or two at a time. By late August, we were getting a steady trickle of berries, and by the beginning of September, the trickle had become a full stream. The berries are now ripening so fast that we have to go out and pick them every day or two to catch them before they turn overripe and drop right off the vine. What you see here is just what I harvested today: about half a cup of berries. Now, multiply half a cup by four pickings each week, and we're harvesting a pint of organically grown raspberries—about six dollars' worth—every week. And if they keep this up until the first frost, which usually comes around here in mid- to late October, then we'll get about fifty dollars' worth of raspberries off these canes just in their first year. The plants themselves only cost us $41.50, including shipping; even if you factor in the cost of the compost and mulch we used on them, we're making back our money and then some in just one year, and we can expect to get the same amount every year for as long as the plants live (which, according to this fact sheet from Oregon State University, could be "many years.")

In fact, it's possible that in future years we may get an even heavier crop than we're harvesting now: the OSU fact sheet says that raspberries typically produce only a "small crop" in their first year after planting. At full production, it says to expect 30 to 40 pounds per season for every 20 feet of row (about 10 plants, which is what we have). If our plants produce anything even close to that, we'll never be able to eat them fast enough; we'll have to start finding ways to "put up" our fall crop for later use. We might end up having to invest in a pressure canner and start giving away jars of homemade jam as holiday presents. But we can deal with that if it actually comes up; for now, I'm not counting my raspberries before they're hatched. Even if the crop never exceeds the pint a week we're getting now, it's still an incredible payoff for what we spent.

Forget the stock market; for an investment that's sure to grow fast and give you good returns year after year, invest in fruit.
Posted by Amy Livingston at 2:39 PM